20 Questions with Brian Corn of QUOR

QUOR is a San Diego-based three piece monster.  They were formed in 2011 and released their first EP, We Are Going To Be Awesome in 2013.  After touring the States, Europe and Japan in support of WAGTBA, they went back into the studio to record a follow-up EP, called Human Paradigm, set to be released on September 10, 2015.  Guitarist/vocalist Brian Corn answered our 20 questions.  Support this band (and their beards)! They already are awesome.  Enjoy!

1. Welcome to Korea Guitar. Great to have you here.  Let’s start at the beginning. When and why did you start playing the guitar?

I started playing around 11 or 12 years old. I began with a bass guitar because my friends had started a band and they needed a bass player. My brother had a black Yamaha bass that I would sneak into his room and practice on it.

2. Do you remember your first axe?

My first guitar was a Yamaha G55-A classical guitar given to me by my dad. He had bought it years before and never played it. My first “electric guitar” was a Synsonics Terminator. 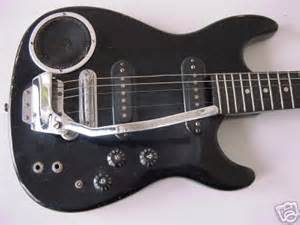 It has a built in speaker along with a standard ¼ jack and a crazy whammy bar that does amazing things to your tuning whether you whammy it or not. Terminator! I love both of those first guitars. I still have them.

I have two main electric guitars and one main acoustic guitar that I currently tour with. An older 470-S Series Ibanez and a Schechter Hellraiser both fixed bridge. I have long been torn about active and passive pickups and these represent both. My touring acoustic is a Voyage Air VAMD-04. The neck folds down and it packs away into an airplane ready carry on case. This thing has been amazing for long fly away acoustic tours and it sounds bad ass.

4. Who are your main influences?

I’m not so sure that I have direct influences in my guitar playing. I’ve just kind of always stumbled around on the guitar blindly it seems. I do have great admiration for guitarists like Jason Becker, Satriani, Malmsteen, Segovia, Liebert, etc.. I carry no delusions that I will achieve their ridiculous level of play, I just keep on steadily pickin’.

5. What was the first concert you ever saw?

I’m not sure exactly. May have been Steve Miller or Queensryche for arena shows and Nuclear Rabbit or Deftones for club sets.

6. Can you remember the first gig you ever played? Where was it and how did it go?

I played at my friend Steve’s 12 or 13 year birthday party. It was at his grandma’s house I think. It was epic.

7. When did you meet John and Doug?

I met Doug when I joined a band called Silverside that he was already in. That was some time ago, maybe 8-9 years. We met Snap Dragon on our search for a drummer for QUOR. We have become a three headed dragon that like to play music.

8. I’m a big fan of band name origins. Can you tell us how you got the name QUOR?

The project was originally called “We Are Going To Be Awesome” and by it’s acronym “WAGTBA”. We didn’t really give a shit about the “names” of “bands”.
While driving down the PCH on a foggy night I saw a giant liquor store sign glowing in the distance. The “L and I” where out and the sign read “QUOR”. I had to stop and photograph the sign. The band name was changed to “QUOR” as all of us wanted a simple unique name. The name “QUOR” poked at the current state of rock labeling everything into “core” genre’s (hardcore, mathcore, metalcore, etc etc.) and also avoided the trends in band naming that make every band sound the same.
In honor of the original band name the first EP was titled “We Are Going To Be Awesome” 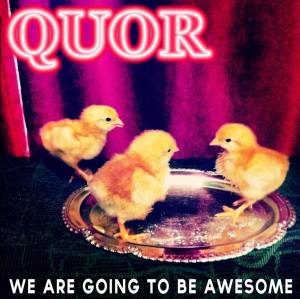 It was originally our band name. We still play “secret shows” under that alias from time to time. We felt like it was a good motivational name for us.

10. You toured throughout the States on the heels of WAGTBA, as well as Europe and Japan. How did that tour go?

Touring is the physical manifestation of one’s music. We have been fortunate to have had some great tours so far.
11. The new EP Human Paradigm is great.  Why did you decide to record another EP rather than a full length album?

We really like to track EP’s. Recording records is a lot of work and time and inevitably shapes the songs. An EP gives you the opportunity to put a ton of focus on the best material and allows your ideas to develop. I am not opposed the “full length album”. The EP format has just been fun and steady.

12. Can you tell us about the recording of the album, specifically the ‘campout challenge’?

We recorded the first single “Human Paradigm” out of town at Swagger Studios in Glendale, CA. We challenged ourselves to produce a song in one weekend from start to finish and Human Paradigm was the result. Our engineer Dan Whittemore invited us to “camp out” in the studio during the recording and we took it literally. I woke up Saturday morning with a slight disorientation from the night before and looked out of my tent to see four other tents inside a studio rehearsal room. There were lanterns, ice chests, and the remnants of bottles and paper plates upon a picnic bench. The whole studio was filled with the sounds of the drum and guitar tracks we had recorded the day before. It was 9:00 am and it was loud and it was fucking beautiful. 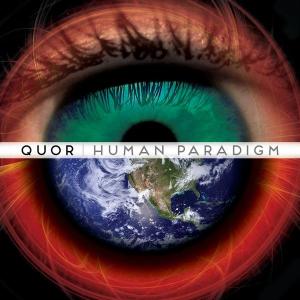 13. What are the tour plans for Human Paradigm?

We’ll be touring pretty hard on this one. We are scheduling for the whole of the USA and Europe through next year. Maybe we’ll make it to Korea? High five!

14. For people who have never heard QUOR and want to hear the definitive Brian Corn guitar song, what would you recommend?

Shit. Heavy question for me. I can say that “The Reverent” on the Human Paradigm release has been my guitar love affair. Just something about the way the riffs flow like a story while playing the song.

15. Every songwriter is different in their methods. How does the writing process work in QUOR? What comes first-music or lyrics?

It might sound crazy but a lot of the time they come at the same time for me particularly when it comes to choruses. As a three piece the guitar and the vocals have become very symbiotic. It’s like a dance between the fingers and the voice. If I have a vocal line in my head it usually comes with a rough guitar and rhythm line and vise versa. Because the individual parts come at once it is usually a learning process to play them.

16. What are the 5 greatest guitar albums you think every player should have?

Surfing With The Alien – Joe Satriani
Rust In Peace – Megadeth
The Hours Between Night and Day – Ottmar Liebert
Perspective – Jason Becker
The Very Best Of Andres Segovia
Marching Out – Yngwie Malmsteen
I know that was 6.

And in your opinion, what is the greatest guitar song ever recorded?

Holy Wars – Megadeth. Holy shit! That song is a guitar masterpiece. I’m going to listen to it right now.

17. My brother owns a School of Rock in Ottawa, Canada. He teaches a bunch of kids how to perform in bands. What advice would you give to these kids about being a musician?

Play from the heart and enjoy what you play. Be open, expansive, and expressive. Music is art, the stage in which it is performed is art. Be awesome.

18. I’ve listened to both QUOR EPs. You have a great, tight right hand chug technique. Not to make comparisons, but it does sound like you were influenced rhythmically by James Hetfield. Is this true and how did you work on your right hand technique to achieve this tightness?

Thanks! I feel like for most of my guitar career I’ve been pretty sloppy, pretty punk. Somewhere along a long line of plugging in and not giving a shit I picked up some chops. I’ve really taken an interest in the dynamics of right hand rhythm work. You have so much control over feel and dynamics from the bridge. I like to blend open and closed strumming and chugging to different degrees and tensions. As far as James Hetfield goes, it is quite possible some of Metallica’s earlier guitar work has snuck in there somewhere along the line but more likely stuff like Overkill and their record Horrorscope. Fuck yeah “New Machine” 4 life!

19. What are the three most important things every guitarist should know?

Power up, Plug in, Pick till your fingers bleed. (My 3 P’s of guitar playing)

20. What does the future hold?

It definitely holds a guitar and I hope I’m playing it loud and hard.