Shock is an Ottawa based metal band.  They released their first album, Once Denied, in 2013 to great reviews.  You can take a listen to the album at http://www.shockmetal.ca.  (As always, support your local musician, buy this album.)  Korea Guitar sat down with Shock’s guitarists John Tennant and Tony V.  Here’s what they had to say…

1. What attracted you to the guitar?

John: I was an Army brat, moving around, new places every 4 years, it was a good way to pass the time and find new friends!

2. What was your first guitar? What are you playing now? 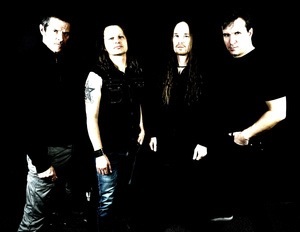 John: I think I may have started on a really brutal acoustic, but the first one I remember (15 years old) was a copy of a semi-hollow Telecaster, again, the typically terrible ‘70s copy that made your fingertips bleed! My first ‘real’ guitar was an Ibanez SG copy, one of the ‘lawsuit’ guitars. Now, I have several Epiphones, I really like the Les Paul Classics, and a Dean VX which plays great and is really durable!

3. Who was your biggest musical influence?

John: I wanted to play the guitar because of Alex Lifeson (Rush); from 1978 on I was absolutely obsessed with his playing. My next icons were the late 70s & early 80s Metal greats like Michael & Rudolf Schenker (UFO and Scorpions respectively), Tipton & Downing (Judas Priest), and later many of the NWOBHM (New Wave Of British Heavy Metal) guitarists from Tygers of Pan Tang, Saxon, early Def Leppard, etc etc etc!

4. What was the first concert you ever saw?

John:  I hate this question because my older female cousins dragged me to a Bay City Rollers concert at Maple Leaf Gardens in the mid 1970s! I hated it, haven’t gotten the ringing out of my ears from all of the screaming since! My first ‘real’ concert was Rush, Hemispheres tour, Ottawa Civic Centre, 21Dec1978, a quasi-religious experience!! Was fortunate to see all the 70s greats – Aerosmith, Black Sabbath, AC/DC, Scorpions, Blue Oyster Cult, etc!!

5. I usually ask The Beatles or the Stones? But since you are metal players, which of the Big 4 (Metallica, Slayer, Megadeth or Anthrax)? Why?

John: Probably a tie – Metallica changed the Metal landscape, and were a MASSIVE influence on what Tony & I were doing in SHOCK’s formative days. I will never forget the impact that the “No Life ‘Til Leather” demo had on me. But … Megadeth has had a more ‘lasting’ impact on me. “Rust in Peace” is, I think, a perfect album, and I really respect their musicianship and uniqueness.

6. Give us a brief history of Shock! Do you remember the first Shock show? Where was it? How many people were there?

Both: We met in early 1985, mutual musical interests, jamming & recording riffs, after hearing NWOBHM & Metallica demo, we immersed ourselves in that whole scene & formed the group. Our ambition was to have nice gear, play with cool bands, and have people around the world hear & like our music – we never made money, but we did accomplish those goals!! First show was at Barrymore’s in Ottawa on 31Aug1985; we were lucky to get a ‘headline’ gig there, pretty prestigious club! We’d already had a bit of local airplay, so people knew some of our tunes – not packed, but a receptive audience!

7 Tell us what’s happening with Shock these days!

Both: Since reforming, we have ‘finally’ released an album, “Once Denied”, and have been humbled at how well received it has been! The album has 8 of our best ‘old’ songs, dusted off, and IMHO it sounds wicked! We have played some great shows, including a couple of openers for Annihilator and a great gig in Montreal at the Foufounes Electriques; after opening for Blaze Bayley next month, we will begin recording our second album.

8. Is there one show you played that stands out more than any others?

John:  Both of our Montreal shows were highlights – opening for Sword at the Spectrum in Feb1989, and headlining last month at the Foufounes Electriques. Such a great city for music!!

9. Who is the best band you’ve shared a stage with?

Both:  We opened for Sword 3 times in the 80s, very compatible bill, and very nice people. Have to also mention opening for Megadeth in 1986; they hadn’t broken big yet, but we were fans & it was an incredible experience!

10. What’s the one piece of gear you can’t live without?

John: Boss tuner pedal – I only got one a couple years ago after 30 years of playing, and couldn’t part with it now!

12. Which current guitar players have impressed you?

John: I don’t keep too current, but I do like Nevermore and I have a lot of respect for Jeff Waters (Annihilator).

13 What’s the most embarrassing thing that has ever happened to you on stage?

Both: Probably one of our early club gigs in Quebec City, I remember we messed up “Driven to Kill” really really badly, luckily we were only playing for the waitresses!

14. If I handed you a guitar and asked you to play the first thing that came to your mind, what would you play?

Tony: I just start to jam.

15. What are the three most important things every aspiring guitarist should know?

John: 1. Tune by ear 2. Appreciate real melody, which can be found in the simplest music 3. There are only two kinds of music, good and bad

16. What do you think of Gene Simmons comments that “Rock is dead!”?
Tony: I wish older rockers would shut up, this includes Mustaine and Nugent!

John: I don’t totally agree, but I understand where he’s coming from, a lot of the honesty & wide-eyed ‘go for it’ attitude is gone; we have an entire generation of guitarists who learned their chops listening to Slipknot, and I don’t think that’s healthy

17. If you could form a dream band, with musicians alive or dead, what would the line-up be and which song would you cover first? Tony:  Dio!!

Tony: Anything I pick up.

John:  I’m not a connoisseur – my Epiphone LP Classic & Dean VX play awesome, sound great, and have got me lots of compliments!

Tony: Way way way too many to mention!!!

20. What does the future hold for Shock?

Both: Opening for Sword in Montreal on 22Feb1989, sold out, believe it was about 2000 people. It was incredible; crowd was actually a bit lukewarm toward us (some unknown band from Ontario!!), but to play on that stage, with our name on the marquee, and Sword treating us so well, left life long memories!!