Michael Wilton is a founding member of Queensryche.  He is also the guitarist in Soulbender, who will release their second album Soulbender II on September 30 on Rat Pak Records.  (This label is on a tear right now!  Check them out!!)  “Like” Korea Guitar on face book for your chance to win a signed copy of the new Soulbender CD https://www.facebook.com/koreaguitar1) Here’s what Michael had to say in 20 Questions with…Michael Wilton…
1. What attracted you to the guitar?
Michael: My fathers’ vast record collection first attracted me to guitar. I used to stare at album covers and imagine myself someday playing guitar and being on the cover of an album someday.
2. A) What was your first guitar and how did you get it?
Michael: My first guitar was a mail order copy of a Les Paul that weighed a ton. I later found out that it was made out of plywood.
B) What are you playing now?
I exclusively play ESP guitars.
C) Which is the best guitar you’ve ever played?
My Fender 1962 original Stratocaster. Simply a beautiful guitar.
3. Who was your biggest musical influence?
Michael: My biggest influences were The Beatles, Jimi Hendrix, Duane Allman, Carlos Santana, Al Di Meola, Andre Segovia.
4. What was the first concert you ever saw?
Michael: When I was a toddler growing up in San Francisco my father used to take me to outside festivals. I think I saw the Youngbloods, Quicksilver Messenger Service, Country Joe and the Fish, Mountain and maybe Santana. 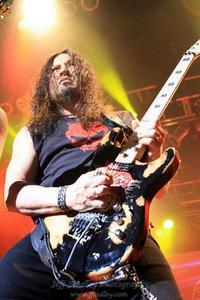 5. The Beatles or the Stones? Why?
Michael: I like them both for different reasons but I would lean more towards The Beatles just because they taught me so much about melody and song writing.
6. A) Do you remember the first show you ever performed?
Michael: I think it was for a high school dance,
B) Where was it?
Michael: My high school.
C) How many people were there?
Michael: About 75-100
D) How about the first show with The Mob?
Michael: That was at a battle of the bands performance at a roller skating hall.
E) Queensryche?
Michael: That was 1982 at the paramount theaters in Portland Oregon and Seattle Washington.
7. Your nickname is The Whip. Where did that come from?
Michael: It was a nickname that was given to me when I was a teenager. I used to hang out with other kids that played the guitar. They said my fingers whipped on the fingerboard so it spread to everyone at school and at parties and became my “AKA”
8. Have you ever had any Spinal Tap (embarrassing) moments while on tour?
Michael: Plenty, falling into the audience and not being able to get back on stage. Ripping my leather pants on stage on the first song. Passing out on stage. Getting lost on the way to the stage.
9. If you weren’t a musician, what would you like to be doing?
Michael: I am a very right brained person so probably a painter or a graphic designer
10. A) What’s the one piece of gear you can’t live without?
Michael: My ESP guitars.
B) Is your studio rig the same as your live setup?
No I have 2 separate rigs. Over the years I have acquired lots of equipment and some of it has gone and some I still have, but regardless I can have 2 rigs.
11. Tell us about your new Soulbender album? Why did it take ten years to record a new album?
Michael: Because it took an offer from Rat Pak Records to get me motivated. We have all been consumed by our daily jobs. We had some extra parts of songs that we rebuilt and injected some modern vibe into. Dave Groves, Wes Hallam and Marty Van Keith recorded all the main tracks at Black Horse studios in Blaine WA. I was on tour with Queensryche so when I got back home I went to work on solos and other refinements and Nick Pollock finished up the vocals. Rat Pak records then took care of the mastering process.
12. How does recording a Soulbender album differ from recording a Queensryche album?

Michael: Soulbender songs are built from jamming together the old fashion way. There are not a lot of layers and dimension like QR. Queensryche is a solid machine, Soulbender is a bit organic.
13. What do you do to prepare for a show? Are you able to get out and wander around whichever city you are in?
Michael: Most of the time you wake up in a parking lot and don’t know where you are, so if there is anything cool to see nearby it is good to take a walk or run, it clears the mind. Other than reviewing parts of songs it’s about visualizing what you might do on stage, maybe a cup of tea or coffee to give the mind a jolt.
14. A) Which country have you yet to play in that would interest you?
Michael: China, India and Korea.
B) Which place, outside of the US is your favorite place to play?
Michael: South America, they are so passionate about their music.
15. What advice would you give to someone just starting out on the guitar?
Michael: Practice, practice, practice. Listen to all kinds of music and go out and see other musicians play live. Set goals and reward yourself when you accomplish them.
16. When did you realize you had ‘made it’ as a musician? Was there a “WOW, I’m finally there!” moment?
Michael: I never have felt that I really have made it. I feel that there is much to learn and so much music to write that I will be busy the rest of my career.
17. Recently, Gene Simmons of KISS declared that rock is dead. What are your thoughts on this statement? What bands out there now, have a chance at bringing rock ‘back from the dead’?
Michael: I don’t believe rock music will ever die it just goes in cycles. I think the point in hand is that rock bands aren’t selling gazillions of records anymore. There are plenty of talented rock bands out there you just have to search for them.
18. You had fantastic musical chemistry with Chris DeGarmo, before he left Queensryche. How hard is it to find that chemistry with another guitar player?

Michael: In a 2 guitar player band there has to be chemistry or it just will not work. Having 2 uniquely different guitar players is a powerful asset for some bands. Chris and I definitely had that.
19. What’s the greatest guitar song ever recorded?
Michael: Stairway to heaven – Led Zeppelin
20. What does the future hold? More Soulbender albums? Queensryche? Touring?
Michael: If the guys in Soulbender want to keep putting out music I am all for it. As far as Queensryche is concerned we have a new beginning, so lots of writing and touring is in the future.
BONUS QUESTION:
21. I always end my 20 Questions with this one. Can you describe the feeling of walking out onto a stage in front of 50 or 100,000 people?
Michael: It’s a total rush!!! All the dues you pay in your career are worth moments like these.