Robert Zakaryan is the guitarist for Adelitas Way, a Las Vegas based hard rock band.  Currently in the studio recording the follow up to 2014’s stuck, this band is a must listen.  Intense, solid rock n roll, the way it should be.  Support them at Pledgemusic and on tour this summer with Red and Bad Seed Rising.  This band will kick you in the face and you’ll love it.  Rob was kind enough to take the time to answer Korea Guitar’s 20 Questions.  Enjoy!

I had an attraction to the guitar since I can remember anything. I wanted to play guitar from the moment I heard one. But it was rock n roll and blues music that really captivated my ears and pulled me in.

When I was 12 my mom took me to the local music store right around the corner from my house, American Music, that sadly doesn’t exist anymore. I got my first electric guitar, it was a black Ibanez Gio and a nylon string classical guitar. I was very eager to play and knew I wanted to pursue different styles of guitar playing right from the start.

What are you playing now?

I started taking lessons at American Music, my teacher there really made it exciting for me, introducing me to a lot bands that are still some of my favorites, as well as introducing me to classical guitar music. Later on he just let me take the reigns and I started learning on my own. I was fortunate enough to have the opportunity to take guitar in high school under Jello Nishimotto. He taught me how to read music and really improved my classical playing. Since then I’ve been progressing on my own.

My influences are all over the place from classical and jazz to rock but the artists that really made want to play music were Black Sabbath, Jimi Hendrix, Metallica, Led Zeppelin, Ozzy. Hearing all that and hearing Randy Rhoads for the first time really changed the game for me. Never heard the electric guitar fused with the melodies and motifs of classical music like that. Blizzard of Ozz was the album that really inspired me to become a lead guitar player.

I saw Kiss open for Aerosmith in 2004 in Vegas at the MGM Grand Garden Arena when I was 13 or 14. My grandma took me, which was so cool of her cause I know it wasn’t really her thing, but she appreciated it and I couldn’t have asked for a better line-up as my first live experience. Both bands are so iconic, it left a lasting impression on me.

I wasn’t in the band when the name was chosen, but it came about from my singer (Rick Dejesus) being stranded in Tijuana.

I knew Rick before I was in Adelitas Way. When the position opened up I was very eager to go out and play. I didn’t care about makin’ money; I just wanted to hit the road. Rick knew I could play and could feel my genuine love and loyalty for music. I didn’t even audition; our first show was at Gillette Stadium. We were invited to play the Patriots playoff game. It was probably the coldest show we played. It’s been an amazing ride since then really, we’ve been fortunate enough to keep playing shows and creating music.

Pledge Music is really all about the fans giving us the opportunity to continue our journey. It’s really an incredible thing. I always knew we could find a way to make records without being on a major label. The internet has really taken the middle man out of a lot of industries, music probably being the biggest one. We just make music for ourselves and our fans now, rather than catering to a corporation that’s trying to sell our music like happy meals. It’s very overwhelming to have such support from our fans, they helped us raise enough money to make another album, can’t thank them enough for that.

The album is set to release later this year, the exact date is still up in the air since we still have to finish making the record, but we’ll probably finish recording it sometime this summer and release it closer to the end of the year.

We’re loud and proud and we put it all out there when we come out on stage. It’s a very raw experience; we don’t rely on production or gimmicks. We just put our gear on stage and let out our true selves resonate. People really connect to that when its done right. It’s what a real rock n roll band should be able to do in my opinion. The energy coming off of us is palpable and the fans really grab onto that, it transcends everything else when you can connect to someone else just by being yourself.

The biggest bands are always the most humble in my experience so its always taught me keep a level head, never let ego take control and to continue working on myself. When we were out with Creed, and Alterbridge, Mark Tremonti would always invite me to jam and show me new things he’d be working on and it was very cool to see someone on his level to be so down to earth and still inspired to create and keep mastering their craft. Slash is another guy that doesn’t ever hit the brakes on playing  live or making records, that’s something I admire very much.

Richie Kotzen is definitely one of them. I know he’s been around for a while, but it wasn’t until 2008 that I saw him live in LA that I even knew who he was. From his tone to his phrasing and his voice, he’s a true talent all around. I was captivated hearing him play the telecaster practically plugged straight in with nothing but his volume knob to control his sound, it really showed me how the guitar should to be played.

Guthrie Govan is another current player that really blew my mind from the first moment I saw and heard his playing. Even though he’s technically proficient he never lets it get stagnant, and always keeps musicality the top priority. Getting into him really expanded my playing in all directions, he is so incredibly versatile.

All of my solos are improvised every time, whether it be live or in the studio. It’s really what being musician is all about to me. Being creative on the spot is how the magic is made. The energy is so much more intense when it’s spontaneously created like that. Its a rush that nothing else can give. When I listen to my heroes like Jimmy Page, Angus Young, Jimi Hendrix I feel that rush, there’s raw creativity and expression being tapped. That’s what I strive to channel through my playing as well.

That’s tough, but I’m probably gonna go with Rude Mood by SRV. That’s one of the baddest things I’ve heard on guitar. Everything he played was!

I think it’s harder with social media, although it’s an incredible outlet, there’s ten times more crap to sort through. Before there was less going on all around so a flyer was all it took to get the word out. Also it doesn’t take much to post something online, before there was a certain level of dedication required to physically go out and promote your band. We have built a following from physically going out and playing in front of people, so it’s great that we can maintain contact with them after the fact through social media. 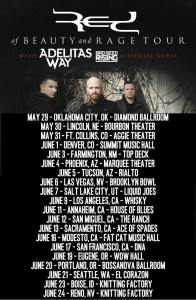 I don’t have a certain regimen just a little bit of stretching and whiskey is all the warming up it takes!

I think that was a little exaggerated to make a point but, yes, making a living playing music is not what it used to be, at least for rock musicians. Enough people, at least our fans, have seen us touring in a van our whole career to know that’s not the case. I wasn’t around back then to really know how it used to be in the golden days of selling millions of records. I don’t really care either, we’re doing it now and this is how it is. We’re alive and making music right now for a reason. No use in worrying how it used to be, or how much money we could made back then.

If I could be in a dream band it would just to be in the Rolling Stones.

If I wasn’t a guitarist I’d be a producer, or engineer, or maybe a luthier, or I’d play other instruments, which I do already. It would still have something to do with music, I’m not really interested in spending my time doing anything else.

Image and music need to go hand in hand. It needs to be an effortless and natural form of expressing yourself, because it’s who you really are. Nothing is more ridiculous than a bunch of dudes dressed up, or being told to dress up in some preconceived idea of what they think is rock n roll. Nobody told Keith Richards what to wear or what to play. He’s the whole package, the “ultimate rock star”, if you want to label it as that. But even that title contradicts the subtle nature that’s involved in being the real deal. You can’t try to be anything like that, either you are and it’s in your bones or you aren’t.