Dylan Furr is an American Progressive metal guitarist. His second release, Juxtaposition is a must have for every shredder out there.  It;s a concept album about “A man’s new trial of religion brings on much more than he bargained for in this captivatingly original story.”  Check this dude out.  He’s the real deal.  Support him by visiting his bandcamp page and buying the album.  You’ll love.  Here are Dylan Furr’s 20 Questions.

1.  Let’s start right from the beginning. When and why did you start playing the guitar?

I started playing when I was 10 because I saw a cartoon character playing it on television & thought ‘That’s what I want to do!’ As lame as it sounds, I got one the next month (for my birthday), it was a Fender Strat my dad helped me pick out with a little Crate amp. I was intrigued by all the possibilities in shapes & tones & notes. I began writing my music as soon as I plugged that bad boy in. I did take a short break from it for about 3 years when I was heavily into surfing & skateboarding, but picked it up again full throttle at about 17.

2. What was your first guitar?

A Mexican Fender Stratocaster, which I still proudly have to this day.

I currently endorse Legator & Esoterik Guitars, so these are my “go to” guitars. I play a variety of guitars though. My Legator arsenal is a 7 string Ninja Pro, a 6 string acoustic, & one of their high model 8 string Ninjas. My Esoterik is a 100% handmade custom guitar 6 string made to perfection, that thing is insane & loved dearly. I even have a guitar I built with my dad which is killer.

4. Who are your main influences?

5. What was the first concert you ever saw?

The first concert I ever attended was Def Leppard in California with my dad. The show was a blast!

6. Can you remember the first gig you ever played? Where was it and how did it go?

The first official gig, outside of my “band” rehearsing in my living room for neighbors to hear in 2007, was a jazz concert. I played guitar for the jazz band in Jr. High through high school. It was at our school for the parents & students & I was stoked because I had a solo & did really well apparently because from then on I was given a solo in almost every song we performed & was the only guitarist in the history of that school to be solely featured on a full ballad (‘Round Midnight).

7. When did you decide that playing guitar would be what you wanted to do with your life?

I think I decided that when I was young & changed it to wanting to be a pro surfer until I almost drowned haha, that changed my tune a bit. I was probably about 17 when I started seriously pursuing this as a career.

8. How difficult was switching to 7 and 8 string guitars? I’ve heard many players say that the thickness of the neck causes a lot of problems.

That is a great question I get all the time. It took me about 1 week to fully get comfortable to a 7 from a 6 & about the same for 7 to 8 (with minimal practice time). Now I do it without even thinking! Neck thickness definitely can be a problem, but it is best to go with a guitar that feels comfortable to you. I love thin necks, but the next guy hates them. Either way, there are both available in any shape or size you need to make it work. It’s just about finding one that works for you & knowing you have to adjust a little. The more you do it the easier it gets.

9. Tell us everything we need to know about Dylan Furr? A brief history of Dylan Furr if you will.

The band started as a solo project with just me. I wrote an album, landed endorsements & got some publicity from it with fans. Once I grew a decent base, I did a few small shows & then a small tour with my best friends (now all members in Rings of Saturn). By this time I started doing demos, interviews, videos, clinics, etc. Finally at NAMM, a fan I met named Max was interested in playing drums for me. So one year in I found my first true full time member then started doing some shows & the group grew as fans increased & led to the current line up pretty much in simple. 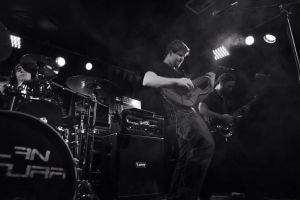 10. The music industry has changed a lot over the last few years. It now seems that Facebook likes are the new albums sold indicator. How has the advance in Social Media affected unsigned artists? Is it better now for musicians or back in the day of major label support?

There is a common misconception here, Facebook likes do not always reflect a band. This is only the case due to Facebook “Like” farms in other countries which allows people to buy fake likes (luckily Facebook got rid of those likes this year). There is also the factor of your fans & who they are, for example some fans may have tons of money & others may have nothing. The kind of music you write may speak to one class more than another for whatever reason, or perhaps your group is best live so they sell lots of tickets but not tons of merchandise or CDs. Like everything else, it depends. I personally would have loved living back in the 70s & 80s just because there was no piracy & that does make a big difference for bands trying to get off the ground. However, the internet helped people become more independent & therefore raised competition as well.

11. How do you warm up for a show? Any particular exercises (on guitar or physically) that you do to prepare?

I used to do warm up for shows, like scales & patterns & certain parts… but now I don’t ever have time since I enjoy talking & mingling with the crowd before I go on. 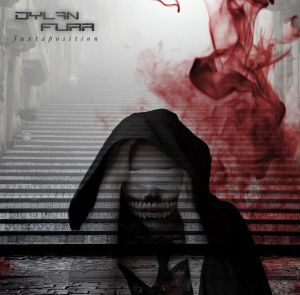 12. Can you tell us about the recording of the album, Juxtaposition, which is fantastic by the way? (Who’s on it? Where was it recorded? Song writing process? Etc.)

Of course & thank you! I tracked all guitars, bass, vocals, & keys at my home studio on an iMac through an M-Audio interface. I used my Artist Laney IronHeart 120 to record all electric guitars & my Carvin for my bass tracks on my fretless 5 string. So everything was done at my house other than the drums.
Max Lobetta is our incredibly fluent drummer, & he is prominently 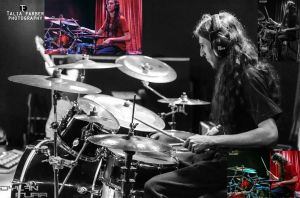 featured on this album with all real drums! Too many bands nowadays use hit replacing or electronic drums, hell we even did when I was starting off! It sounds so much better with real ones though! Those we tracked with Paul Tavenner of Capitol Records up in Los Angeles. He was a very knowledgeable guy & fun to work with. We recorded drums there for only 2 short days. We also have 2 featured guitar guest soloists on the album: Miles Dimitri Baker (Rings of Saturn) (“Unveil”) & Dave Reffett (“Hidden Motives”).
I wrote all the parts I recorded & would get input from Max & members for changes &/or input for alterations if any. Max wrote all of the drum parts & gave input on vocals as well as helped shape the mix of the album by giving me feedback throughout most of the process (he has a great ear). I then mastered it here at home with tips from Paul Tavenner (mastered professionally for Capitol Records for decades).
The songs were written after I came up with the concept of the album & drums were written to the music I provided once it was complete.

13. What’s the most embarrassing that has ever happened to you on stage?

I almost have fallen on stage if I get dizzy from headbanging haha, other than that & being sick for a few shows I can’t recall anything too bad ever happening…yet.
14. Is guitar music finally making a comeback after years of rap/hip hop and pop taking over??

The media will tell you no & it is dying out. However, I do not entirely believe that because it is still one of the most widely played instruments. I sure hope it does though & I believe it could if more people paid for their music & made an effort to hit shows & support bands that are trying to do that. Until then, larger companies that produce more popular music will continue to dominate until there is either a new trend or a new generation of buyers with new taste. It all really depends on demand for that, if people talk about it & support it, it could happen!

15. For people who have never heard Dylan Furr and want to hear your definitive guitar song, what would you recommend?

I like to think I put something different in every solo. If I had to choose one song to tell people to check out to define my guitar sound it would depend on what they wanted:
Sheer Speed – “U.F.Ø.”
Melody that gets stuck in your head – “Retention”
Creativity (varies on the person) – “Within the Depths” or “Manifest”

16. What are the 5 greatest guitar albums you think every player should have?

17. My brother owns a school of rock in Ottawa, Canada. He teaches a bunch of kids how to perform in bands. What advice

would you give to these kids about being a musician?

Being a musician is the coolest feeling ever if that is what you dream of. I get so ridiculously stoked on every comment I get! Does it pay a lot of money? No, not right now. However, you have to be optimistic & constantly looking for new opportunity & bask in the enjoyment of the fact that you get to create something people enjoy in another way than anything else out there. That is a rad feeling.

18. What are the three most important things every guitarist should know?

How to improvise (because at SOME point you WILL mess up on stage & need to recover, but when you’re good at it NO ONE notices), prioritizing/planning (practicing material, where you want to be in a few months, how will you fix the problem you have with sweeps etc.), how they sound or what their niche is (this takes a while but when you find it, run with it & build upon it).

19. What does the future hold?

Currently, the Dylan Furr Band is looking at landing some additional endorsements to our 5, we also are currently shooting a couple music videos, a new upcoming tour with some bad ass bands, & hopefully lots of good luck & fortune for us all!

20. In your opinion, what is the greatest guitar song ever recorded?

Oh man…that is a tough one. I hate that I have to keep saying it depends haha but it does since every one is different. So this would purely be my own opinion & I know a lot will disagree but I’d have to say “Waves” by Guthrie Govan is my all time favorite guitar song at this time. Melody, shred, harmonies, groove, & feel is all in there & all are goal of my music.